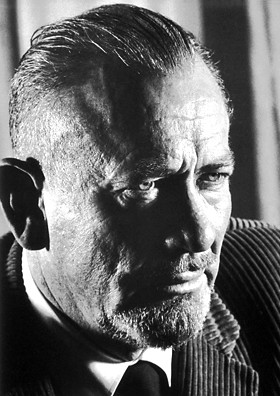 John Ernst Steinbeck Jr. (/ˈstaɪnbɛk/; February 27, 1902 – December 20, 1968) was an American author. He won the 1962 Nobel Prize in Literature”for his realistic and imaginative writings, combining as they do sympathetic humour and keen social perception.” He has been called “a giant of American letters,” and many of his works are considered classics of Western literature. (Information from Wikipedia)

Deadly Kids, Stinking Dogs, and Heroes: The Best Laid Plans in Steinbeck’s Of Mice and Men, by Louis Owens

California Dreamin’ The Significance of “A Coupla Acres” in Steinbeck’s Of Mice and Men, by John L. Marsden

Coordinate Forces in “The Leader of the People,” by James C. Work

Men, Mice, and Moths: Gradation in Steinbeck’s “The Leader of the People,” by Max L. Autrey

The Turtle or the Gopher: Another Look at the Ending of The Grapes of Wrath, by Stuart L. Burns

Steinbeck and Ricketts: Escape or Commitment In The Sea of Cortez? by Richard Astro

Of Mice and Men: John Steinbeck’s Parable Of The Curse Of Cain, by William Goldhurst

Steinbeck’s “The Leader of the People”: A Crisis in Style, by Philip J. West

In Defense of “Westering,” by Robert E. Morsberger

“Westering” in “Leader of the People,” by Donald E. Houghton